Many of you are familiar with the significance of Mardi Gras, or Fat Tuesday—another holiday based on the Christian calendar.  Here are some interesting facts about the origin and traditions of Mardi Gras, one of my absolute favorites.  Laissez les bon temps rouler!

Mardi Gras, French for Fat Tuesday, is the last day before Lent, the season of fasting and prayer observed by most Christian denominations in the forty days leading up to Easter.  A time for carefree celebration, Mardi Gras traditionally served to balance out the solemnity of the days that follow.

Many other cities around the world are also noted for their Carnival celebrations, including Venice, Italy, and Rio de Janeiro, Brazil.  Mardi Gras is known by many different names around the world, including Shrove Tuesday in the United Kingdom, and among many North Americans of British descent; Paçzki Day among Polish immigrant communities; and Fasnacht Day in areas with large German-immigrant populations, such as Pennsylvania Dutch Country.

In addition to parades and parties, many Mardi Gras traditions involve special foods. The most common of those in this country is the eating of pancakes, doughnuts (paçzki), or other sweet pastries. The reason for such traditions is that only the simple foods are supposed to be eaten during Lent, and rich ingredients such as eggs, milk, and sugar must be used up before the fast begins. Pancakes and doughnuts were seen as an easy way to use perishable goods so they wouldn’t spoil. While the tradition of eating rich foods on Shrove Tuesday is widespread throughout Europe, it is most strongly associated with the United Kingdom, where Shrove Tuesday is commonly referred to as “Pancake Day.”

Mardi Gras celebrations also include a King Cake, also known as Twelfth Night Cake. The cake itself is sweetened yeast bread that is usually baked in a ring shape. The cake is frosted with the traditional colors of Mardi Gras — Purple (symbolic of justice); Green (symbolic of faith); and Gold (symbolic of power). While this cake tastes delicious, the real treat is what’s inside the cake!  Bakers of each cake hide a special token within the cake. The token can be a dried bean, a baby figurine (which represents the Christ Child) or others. The lucky finder of the hidden surprise is supposed to enjoy good luck for the coming year and is sometimes expected to bake the cake next Mardi Gras.

This year, the “official” Mardi Gras celebrations have been canceled.  No parades, no Krewes on floats, no “throws,” no dancing in the streets. Instead, people have decorated the outside of their homes as elaborate “floats.”  To view some of these creations, search for “pictures of Mardi Gras” on the internet. 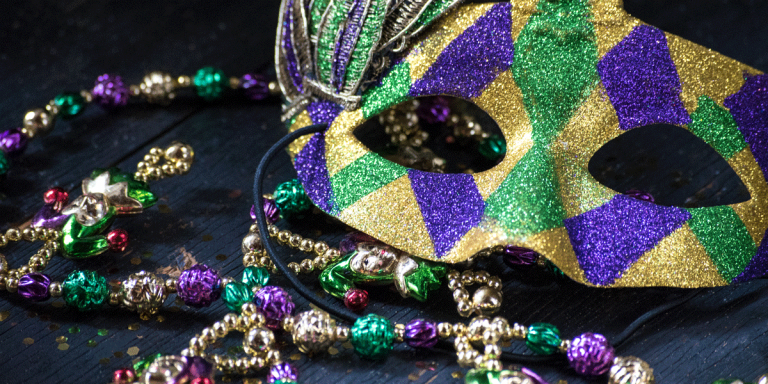