Hannah was praying silently; only her lips moved, but her voice was not heard; therefore Eli thought she was drunk. So Eli said to her, “How long will you make a drunken spectacle of yourself? Put away your wine.” But Hannah answered, “No, my lord, I am a woman deeply troubled; I have drunk neither wine nor strong drink, but I have been pouring out my soul before the Lord. Do not regard your servant as a worthless woman, for I have been speaking out of my great anxiety and vexation all this time.” Then Eli answered, “Go in peace; the God of Israel grant the petition you have made to him”. — 1 Samuel 1: 13–17

Eli was the high priest of Shiloh — a position with power. To have power given by the culture or to have control provided by religion brings with it the risk of losing touch with humanity. So the man with power sees the drunken woman. The problem is the woman is struggling with life and with God. She defends herself with the religious man, and he ceases to be arrogant and powerful. He does as he should and offers the woman the peace of God. The woman, Hannah, becomes the mother of Samuel, the one who anoints King David.

The minister had a bad day. All the staff had gone home, and he was eager to get home, have a quiet meal and relax with his family. As he passed the front door of the church, there was a person at the door. “He looks like another one of those poor drunken street persons,” he thought. “I don’t need that right now.” He ignored him and avoided eye contact. But he felt guilty and eventually turned and opened the door. The man at the door asked, “Does Bus 54 stop on the corner?” He was a simple person in need for whom Christ died. The minister was, too, and he had answered the call to proclaim Christ’s peace and love to the very person now standing before him asking about a bus route. Not everyone will be someone who will be part of something great, but everyone is a child of God who can foster peace so that each one of us can receive it.

Lord God, in this time of Lent, help us to see through our power and arrogance to see clearly the peace that can be offered to everyone we encounter. We are all children of God for whom Christ died on the cross. In Christ’s name, we pray. Amen.

This devotional is taken from the Presbyterian Mission Lenten Devotional for March 3, 2021. 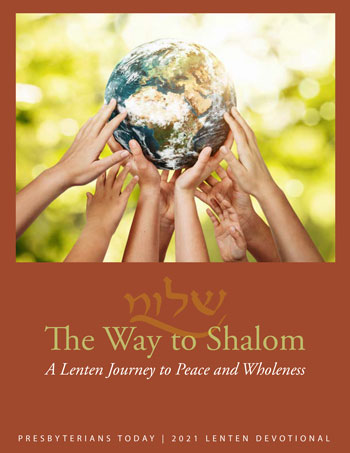